The watermark; the oldest and most reliable paper protection element

Radeče, 12.11.2019 – Although the watermark appeared as early as the 13th century, it is still considered a protection that is difficult to falsify, and counterfeits can be detected quickly. It is mainly used for documents whose authenticity is important and to produce other papers in which it forms a decorative element. Radeče papir nova, d.o.o. is the only paper mill in Slovenia that produces watermarks.

In the past, paper mills used watermarks as their seal to trace paper origin and quality. You could say that they were used like logos are today. These were mainly single-stage watermarks, which are still made today on  Fourdrinier paper machines,  by using a dandy roll, on which the characters are mounted and impressed into the paper. These characters are basic and simple.

In the 19th century, a process of paper production with cylinder mould was developed, where the paper itself is formed on a circular sieve. The development of this process made it possible to produce an embossed watermark that is imprinted in the sieve itself. A cylinder mould made watermark  incorporates one, two or more tonal depths and creates a greyscale effect. Such a multi-tone character is made with the help of a relief on the sieve (screen), which is imprinted with the appropriate tool (matrix-patrix cliché).

Radeče papir nova, d.o.o. is the only paper mill in Slovenia that has produced watermarked paper in the past and still does so today. The archives in Laško store paper bearing the watermark of the Radeče paper mill dating from 1736. Today,  we are using the cylinder mould process on our paper machine PS5, where  we produce various high quality stage watermarks that are used for passports, licenses, certificates, diplomas, visa stickers, banknotes, cheques, shares, coupons, permits, birth certificates , notarial records, etc.

What is protected (security) paper?

Protected (security) paper incorporates various security features that prove the authenticity of the material and prevent falsification of documents. These elements can be seen in daylight or UV light. They are integrated into the paper in such a way that it is practically impossible to remove them without damaging the surface of the base material. Most security papers also have a watermark. Its design and complexity are tailored to the end product and customer requirements. The preparation and production of the watermark itself has changed a lot. Motifs used to be made by hand as a relief in a wax plate. Then, by using an electroplating process, the tool or die and counter die were made and used for imprinting on the sieve. Today, we can make watermarks faster and easier with the help of graphical programs and CNC technology. Design solutions for the watermark are prepared in our paper mill (from the basic drawing of the customer). They are graphically adjusted to serve watermark functions before the tool is made. After making the tools on the paper machine, we make first test character; after confirmation of the watermark by the customer, we make the whole sieve. Watermarking is based on our own knowledge and the development of a team of experts at the Radeče paper mill.

In addition to watermarks, security papers contain other modes of protection, such as UV fluorescent and visible fibres, tablets, security threads, etc. We provide our customers with personalised protective fibres and tablets, which means that we can find the state’s inscription on the fibre and, for example, its flag on the tablet.

This year at Radeče papir Nova, d.o.o., we took a step further in the field of printing with protective colours (iriodin or other protective colours) and the application of hologram strips. Together with our partners we made paper that has iridescent printing. 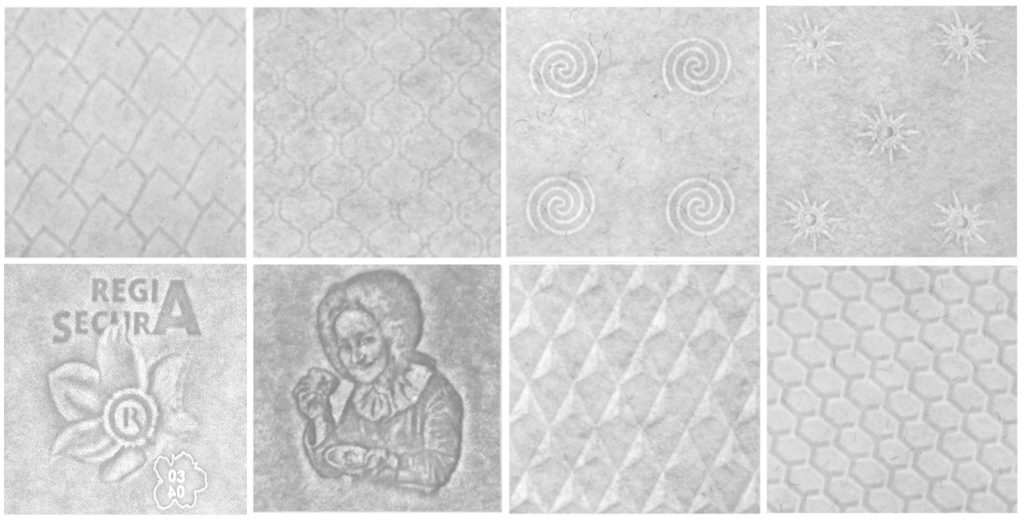 There are different types of watermarks (clockwise from left): continuous (first six), monotonal (first four), dark (first and second), light (third and fourth), continuous duotonal (fifth and sixth) and multitone positioned (seventh and eighth, with portrait and mark). Electrotype is a combination of portrait and caption (eighth character). 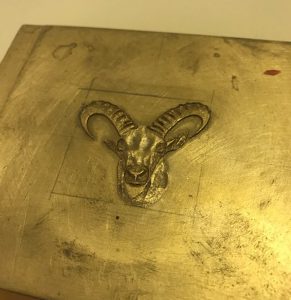 An example of a watermark making tool (engraved in brass).

Want to learn more about our products and solutions?

We use cookies to ensure that we give you the best experience on our website. If you continue to use this site we will assume that you agree.Ok